1890!  The Northern Pacific Railroad reached St. Regis.  The sleepy little town in the “V” formed by the St. Regis and Clark Fork Rivers.  The town thrived then boomed in 1906 as the Milwaukee Railroad built a line paralleling the Northern Pacific to Lookout Pass and west to the coast.  Around the same time the Northern Pacific built a spur to Paradise.  No longer did settlers arrive with loaded wheelbarrows, but in style with hundreds watching as the trains would arrive.  There were jobs: logging timbers for bridges, cutting railroad ties, milling lumber to be shipped by rail and feeding and entertaining thousands from nearby railroad and logging camps.  By 1915 the boomers were gone.  Railroads had survived avalanches and fire to face a new threat.  A shiny new Maxwell 5 passenger touring car arrived in St. Regis.  Motorists of the twenties un-fazed by obstacles tackled the Camel Hump Road (“the terror of autos”) and rode the “The Snail” (ferry on the road to Paradise).

For 72 years the railroads provided services and a healthy payroll, but autos, trucks, floods and avalanches took their toll.  By 1979 only one rail north remained.  The end of an era, but not the end of St. Regis.  By 1986 it had an interstate, scenic routes over Camel Hump and St. Joe and to Glacier Park.  Rivers, railroads and tourist accommodations still make St. Regis a thriving town.

The Big Blow Up
August 11, 1910 – 3000 fires raged in Idaho
August 20, 1910 – Hurricane force winds joined fires in a 70MPH blaze racing toward Montana
August 21, 1910 – St. Regis citizens anxiously scanned the glowing sky as gritty ash fell.  A relief train from the west arrived with dazed refugees; more women and children were crammed on and it headed for the safety of Missoula.  Those remaining faced the roar of the fire burning embers from the sky.  By 3PM, smoke blotted out the sun.  The battle for St. Regis had begun!

Eleven days later, rains ended the 3 million acre fire.  Amount St. Regis residents despair and relief mingled to the west.  Entire towns lay burned.  86 were known dead.  Countless animals lost: mines, mills and railroads destroyed and 8 billion  board feet of timber blackened.  In St. Regis, there was no loss of life but the beauty and the economy lay in ruin.

Experience the history of St. Regis and Mineral County.  Download the Next Exit History mobile app and begin exploring today! 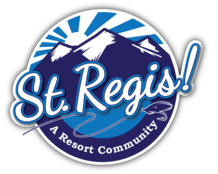